Colman-Egan Students Step Up to Help

Colman-Egan Student Mark Collins, who has nonverbal Cerebral Palsy, moved into his own apartment this January located in the Harth House in Madison, which is a supervised residential group home for people with disabilities.

This big step for Mark, 19, wouldn’t have been possible without some generous support from peers and others around the Colman-Egan School District and Madison community.

The Colman-Egan School District and Montgomery’s Furniture of Madison teamed up to donate furniture for Mark’s new apartment.

With the smile that Mark put on everybody’s face, the C-E Class of 2017 wanted to repay him and did so by raising money through 50/50 raffle tickets at basketball games, with funds used to buy Mark his own dresser. Montgomery’s donated a bed and sold the dresser to the C-E students at a discounted price.

A number of students took a bus over to Madison to pick up the furniture and help Mark move to his apartment.

“The Colman-Egan School has been such a good experience for Mark,” Special Education Consultant from Valiant Living – where Mark has attended since August of 2016 – Perry Johnson said. 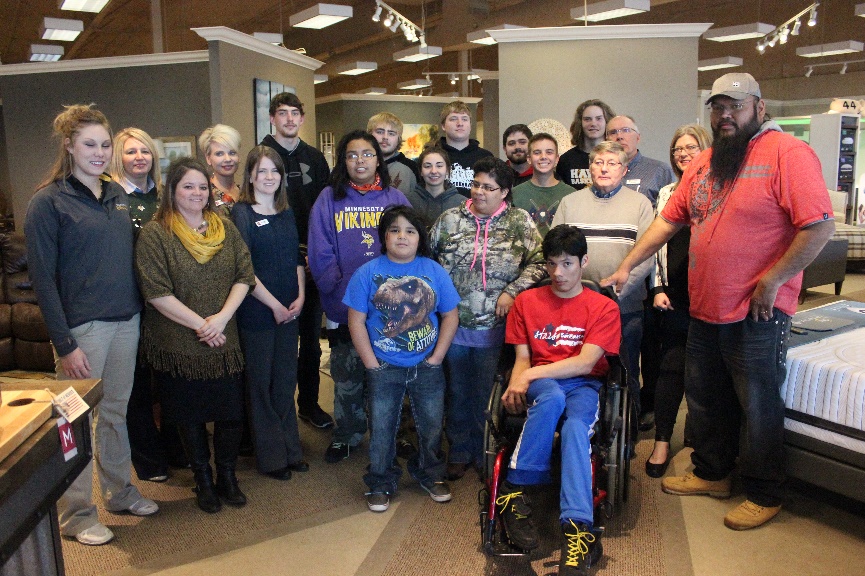 “The social acceptance and social courtesy this high school has shown to him, is exemplary.”

Mark’s family is very thankful of how much Montgomery’s and the Colman-Egan School District helped them along the way.

“I wish all students that come here would have the positive self-esteem and determination that he has,” Johnson said. “I think the Colman-Egan Special Education program deserves credit for that.”

Mark, who was chosen as homecoming king in 2015 by his fellow students, is thankful for the support he has received along the way and very happy with his new apartment.

It’s happiness shared by those from the district, who are very excited for him to be on his own and doing well.

“You think of someone who’s nonverbal, who can’t talk, and he’s got the personality of a rock star,” C-E School 7-12 Special Education Teacher Tara Pemrick said.

“The student body just loves him.”